Remembrance of Futures Past, or Where’s my conveyer belt sidewalk? 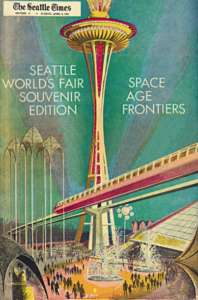 We are rapidly approaching that wondrous time of year when pundits congratulate themselves for being right on technology. I used to make pronouncements about technology quite frequently because I was an avid reader of Popular Science and a couple of other magazines that would now and again publish stories about domed cities on the moon which either looked like Marin County or a five mile in diameter dentist office waiting room (depending on whether you were reading Whole Earth Review or Popular Science). If I had another life, I would love to take up the project of analyzing our vision of the future to see what it tells us about ourselves today. It has only been in the last couple of hundred years that the western mind has been able to wrap its self around the idea that the earth might be a bit older than 10,000 years. It astounds me that people think they know enough about humanity, social systems and technology itself to make predictions 20 years out.

I had a lot of questions about the future as a child. I wanted conveyer belt sidewalks. I could tie a rope to a tree and skate board all day long. But then, do they run all night? Will they eventually squeak? Why would we need them if we are all living in elevated pods connected by monorails? We will all have personal rockets and vacation domes on the moon which brings us to the space helmets. From what I could tell there were two kinds of space helmets, the fishbowl with the vacuum cleaner hose and the one with fins which were far cooler but led to the further question: Do you really want to be in a situation where your helmet requires fins? The fishbowl always seemed fragile or at least unwieldy.

We live in a strange state of being where the future never really gets here but is actually happening all around us. My brother went to an alternative high school that was run by an electrical engineer and his hippie sons. I was hanging out at the local community college playing with their computers (the TRS 80). He came home one day with a floppy disk and was really excited. I told him that it was a ridiculous technology: why would someone use a proprietary disk when you could walk into any Radio Shack and buy a cassette tape for the computer tape drive? I also thought that we would still be using BBSs (bulletin board systems) and that the whole http and internet thing was a fad. Why would you do that when you could upload and download hypercard stacks from a BBS?

If you really want to know how NOT to predict the future, read “The Omni Future Almanac” by the editors of the now extinct “Omni Magazine.” The book was published in 1981. The writers for the magazine would take existing technology such as the laser disc, and try to extrapolate out how the technology will be used 10, 20 and 30 years out to hilarious effect. It not only makes ridiculous predictions about the future but it even makes the claim for “The Only Current Major Athletic Record That May Never Be Broken” – Beaman’s 29′ 2.5″ long jump in the ’68 Olympics. And guess what? It was broken by Mike Powell in the Tokyo World Championships in 1991 by two inches. But notice the qualifier “That May.” That is an important futurist tool. Among my favorite claims are:

All of the above predictions are variations of the techno-fantasies from the 50s. Of real interest to myself, and those legions that read this blog, is the vision of the future of education. In the cocaine addled 80s it was seen by the writers of Omni to be just another biological function. Educators will track students biological cycles for their optimum learning times (yes, this would be BIORHYTHMS for those having a flashback right now). We will also create better smart drugs to increase their learning. There is a nice Dr. Strangelove statement on p. 213 where it claims that the popularity of adult education will increase as schools become the meeting place for single adults. The book is filled with people learning by watching videos, video disks, and teletexts, etc. then taking tests and “learning.” In other words, the predictions about learning do not go beyond the correspondence school vision of learning. It is important to look at these kinds of predictions because they tell us where the bumps in the road are going to be in innovation. Knowing what expectations are hampering the general public can tell us a lot about where we are not going to go.

Despite my past record of being “wrong,” I have high hopes that my MS in Education will allow me future moments of tele-punditry on the 3-D virtual ElectroTeletron just like Tom Swift.

The cardinal rules of being a Futurist include:

If you have some favorite remembrances of futures past that turn your mood ring green, feel free to comment below. I will be posting more about predictions in the future which will be here any moment now.

Have a Happy New Year!

This entry was posted in future and tagged future, futurists, newyear, predictions. Bookmark the permalink.