How OERs Will Destroy the Future! 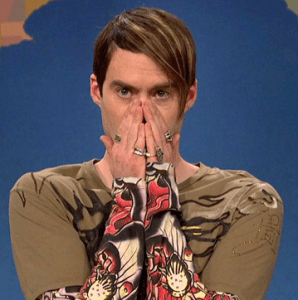 LeiLani Cauthen published an opinion piece called “Are you still going to prefer OER? The $2.28 Billion Loss to Publishers & the Future – Part 1” that has been batted around Twitter for the last couple of days (thanks Robin DeRosa). It is a textbook example about why corporations do not belong in the education sector. Or at least, I don’t remember that it was our job or in our mission statement to make sure that corporations can maximize their profits. I feel like Stefon. I want to say “Yes, yes, yes…this article has EVERYTHING…no understanding of how education works, face-to-face or online; corporate sense of entitlement, persecution complex, straw-men arguments, no historical context, no understanding of how OER are created, shared, adapted, or used, and a big dose of paranoia.” I could go on. This article is going to wind up a big, gleeful piñata party on the internet. Let me take a couple of swings.

The gist of the article is that maybe we shouldn’t be promoting OER because it is hurting the textbook companies. And of course, the future is at stake! Please at least read that paragraph, the seventh one down in her article. On one of the future threats she asks “Will poor kids get grainy video and scanned-in scraps of black-and-white text while the rich kids get animated and interactive math-on-steroids that talks back to them in encouraging tones?” This is actually why I went into education and have been a creator, advocate, and promoter of open education resources because I have worked and taught in school districts where the students got NOTHING because the district was out of money and commercial options were too expensive.

The whole language of the article is just loaded and strange. In the opening paragraph she writes about an initiative that has “…whole States to agree to lean more heavily on free or “open license” digital resources over paid professional materials (PPR).” The states are not relying on “free” materials – open licensed materials are free but not all free materials are openly licensed. She contrasts OER (I think that is where she is going) with something she calls PPR, “paid professional materials.” I find that really insulting to the professional educators, researchers, instructional designers, and the myriad of others who have created OER. No one calls commercial textbooks or commercial ancillary materials PPR. She is coining a word and an abbreviation that is pretty meaningless.

There are a lot of things in this article that are just plain wrong. There are three statements in particular that show the author’s complete lack of understanding of the current OER environment. I will just address three here that hit me where I live:

It sounds like a great idea: put OER in the hands of corporations and let them innovate. The problem with that is not just a tax status issue, but that the goals of education and corporations are nearly antithetical to one another: no textbook publisher or commercial platform is going to walk into the boardroom and say “good news everyone, we project that our clients will be paying less and less each year over the next ten years.” The other thing that happens is that one year you have an altruistic corporate board and the next the company gets sold because all the people who sort of understood education retire.

There are too many things going right with OER. Creation, adoption, and curation has been slow because the open movement is up against a lot of corporate money. I am not particularly against corporations, but they are not a replacement for the vibrant community that a grass-roots, instructor led, open environment can facilitate.

That’s my three swings. I will let folks more eloquent and smarter than I pick up the bat. I can’t wait for Part II!