There is an interesting story about magic mushrooms in Wired Magazine this month. It includes a nice graphic that demonstrates the connections in the brain when on psilocybin. I find this interesting because there are a number of researchers attempting to confabulate what we know about neuroscience with pedagogy. The punchline from this article is at the end where the researcher, Giovanni Petri, a mathematician at Italy’s Institute for Scientific Interchange, says “The big question in neuroscience is where consciousness comes from…for now, we don’t know.” So my question is: if neuroscience can’t tell us where consciousness comes from, how do we use the same science to make proclamations about how we learn?

I really want to know the answer to that. To researchers like George Siemens and others: I would like to volunteer myself as a test subject. As a Californian, I am willing to hit the hot tubs in Big Sur and do the hard research. 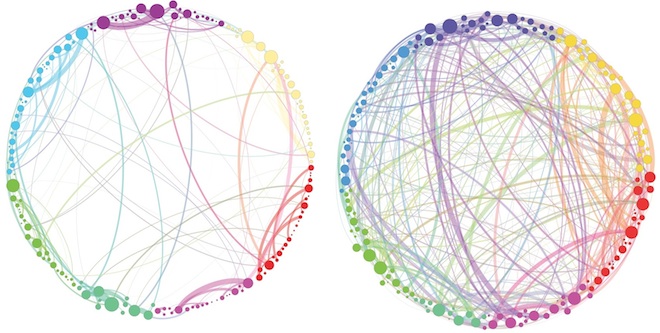 Communication between brain networks in people given psilocybin (right) or a non-psychedelic compound (left). Petri et al./Proceedings of the Royal Society Interface

This entry was posted in connectivism and tagged connectivism, George Siemens, neuroscience. Bookmark the permalink.