prisoner106: Some Thoughts on Spy Shows of the 60s 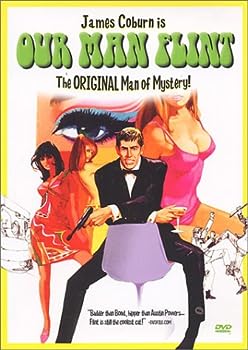 Cover of Our Man Flint

I was born in 1961 and grew up watching a lot of spy shows. Spies were everywhere: Saturday morning cartoons included “Secret Squirrel and Morocco Mole,” Mad Magazine featured “Spy vs Spy,” and we watched “I Spy,” “Get Smart,” “Mission: Impossible” “It Takes a Thief,” and “The Avengers.” I was never a fan of the “Man from Uncle” bit, but it was on now and then. When we went to the movies we would see movies like “From Russia with Love,” “Our Man Flint” (seriously, they showed this to us at the Saturday matinee, to children), and “The Ipcress Files.” Combine all of that with all of the Cold War nuclear hysteria and you had a really paranoid, but very low-cut and swank cocktail with a side of paisley! What was great about our Saturday matinee at the Santa Maria Theatre was that the owner would get these fourth run movies for cheap and it was usually something like “Murderer’s Row” a Matt Helm movie starring Dean Martin and Ann Margaret. All of this spy stuff pervaded our minds and were the fodder for very elaborate charades at play time. I remember just being old enough to walk down the street to visit friends by myself (but not old enough to cross the street) and one of the first thing we did was start to put together “spy kits” – string, bottle caps, an old block for a secret radio, etc. We didn’t have proper briefcases so we found some old purses. So there we were running up and down the back alleys of Santa Maria toting purses! Needless to say, some of the parents were concerned.

As a teenager I was less inclined to carrying a purse, but still really appreciated shows like “I Spy” which was in constant rerun and Michael Caine’s Harry Palmer in movies like “Funeral in Berlin” and “The Billion Dollar Brain.” The characters played by Bill Cosby, Robert Culp, and Michael Caine captured something of that politically alienated rebel spirit that was more common in the Nixon era. They had personal moral issues about what they were doing and how power and influence were being wielded. The fantasy of the world of the spy is a great metaphor for the alienation of teenagers from the world around them. It justifies their own social awkwardness by giving them a heroic secret.

Many were learning the lessons of the time: one side could be just as bad as the other. We were also learning about the seemingly amoral nature of technology: behind every super-villain, is a really great super-computer.  I am sure someone has written on the role of technology in pop culture of the 60s but it is a really interesting mirror to look into.

None of this is particularly new or profound – but then imagine in the middle of all of this nonsense, a show like “The Prisoner” comes along. At the time I saw it (on public television in the 70s), I had to look past some of its more surreal aspects to really get it. Some of those more surreal aspects, beyond the circus-like atmosphere and the lava lamp fetish, was what I thought an improbable storyline – No. 6 being kidnapped and taken to an island – surely there has to be an easier way to get information from someone? So I looked past all of that and what I found were really interesting essays on psychology, identity, politics and authority.

But looking back on all of this from this vantage point (54) I begin to see repetitions and patterns: political variations on common themes especially now in the post 9/11 Era of “Extraordinary Rendition,” “Enhanced Interrogation” and other Orwellian euphemisms. The series, unfortunately, has an urgent immediacy. People do get taken to figurative or very real islands (e.g Guantanamo on Cuba) on very flimsy to solid pretenses, are held there with out trial or representation, and then tortured for years. If this were happening in the 60s (which had its own problems), there would be a movie with someone like James Coburn rescuing the captives and blowing-up the island. I like that we are revisiting The Prisoner because I think it is an unconscious call back to a moral center that we let fear take from us.

4 Responses to prisoner106: Some Thoughts on Spy Shows of the 60s